The Divine Feminine & the Campaign in the U.S. 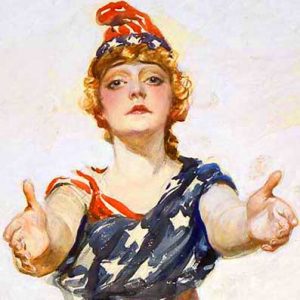 When you consider the fundamentalist view of power—the one that articulates “other” in the first place, then ceases to be aware of the value and the needs of others—what do you think is the best way to deal with them? Through fighting with them? Through loving them? This is a bit of a trick question, because there’s reason to do a bit of both, to hold others accountable for their actions while loving them, by holding them accountable. This can take the form of favoring one candidate or another in the race for U.S. President.

The basic construct of the race for U.S. president is an old-fashioned slugfest between what you can consider Right vs. Might. For in your depictions of what the two prominent candidates portray in your many newspapers, television shows, etc., will be found the seeds of change into whatever you decine (decide in divine ways) to do in the next phase. We’ll explain.

The poetry of Donald Trump is something to behold. He is an articulate person who does not give up easily, and this shows a very strong belief that the mighty have to be in charge of everybody. The mighty need to show the world what the best way to be is. The mighty need to tell everybody what to do.

What do you think is the problem with this? The problem is this assumes that the mighty—the ones in power—know better than you how to live. The mighty—who have taken their places in the presidential offices, the boardrooms of large companies, at the heads of armies—all display the might vs. non-mighty paradigm that you have longed for sometimes when you were a child and needed to be assured that everything in the world was just fine.

This is not something bad, it is something young, in consciousness terms. The reason for it is to pull you into a sense of support from the universe, which helps you to articulate yourself in terms that help you be mighty, too. The problem is that when you don’t feel mighty, and you give up your power to those who act against the real mightiness of all things, you get sideswiped by forces that do not want your best self to thrive and who might even take advantage of weak individuals to prove how mighty they are. When you get the sense that somebody positions themselves with quips about how very mighty they are, take heed because what they are saying is: you are not. We’ll explain.

Every person who is ever born has the might of the Divine in them, the ability to conjure miracles, the ability to love beyond measure. These are mighty things. In your depictions of God, you sometimes attribute might to God only. This is a problem, because you can’t just rely on God—or whoever you think God is—for the answers. You need to assume your own might, because this is how things work. You ought to allow yourselves to be mighty when you’re needing to be, with the full assurance that when you are doing things in love for others, you have all the might you need. In comparison, when you think it’s okay to not be mighty, when you need the assurance that you will sometimes be vulnerable, that’s when the seeds of “right” take shape.

The Clinton administrations use the rightness element to their benefit. They take in more than their share of wealth. However, they donate it to much of the world through their charitable acts. We will note, too, the world needs leaders who look at the world’s issues, not just the U.S.’s, because you are more than citizens of the U.S., you are citizens of the world. So in reaching into other spaces, you get the real thing: the mighty that’s in each of you in the world.

This is an important thing to consider, that every inhabitant of the world is mighty in their own way. What more can you want than to claim your own inner resources to do what you will in the world with love for all things? In fact, the most dangerous thing is to not feal (feel in real ways) your own might, because what will you do when somebody comes to push you around? You will not be able to push back.

We want to assure you that you have great resources in you, and you do not need to concede power to anybody when you realize that your power is in you always, even if you are in the depths of despair. But these are the things that powerful political people sometimes don’t want you to know, which brings us back to Donald Trump.

The purpose for his election to office of Commander in Chief would be to elect somebody who would make things so terrible that you would want to enjoy your own sense of might in order to restore the planet after his ill-conceived plans were put into action. The problem is that Trump is not going to be the person he claims he will be: he will abdicate responsibility as soon as he is in office. What else has he done except to blame others for his own unique challenges?

In respect to Hillary, she has many challenges, too, some of which have to do with the “legacy of might” the next president will assume. So there are already forces in place that specify the need for U.S. to shake up the world when needed, which she grapples with. However, there’s not any reason to believe that she will take on the role of president to encourage every haven for corruption, for the ideals of love that flavor her speeches will be what is in store during her presidency if she is able to reduce the corruption and strengthen the middle class as well as the poor. For in her “right” message, she has the seeds of real might: the ability to assure the well-being of all citizens of the planet in ways that prompt them to believe they are indeed all part of the mighty forces of goodness, of love, of care for each other.

In this, the Divine Feminine needs to plow through the despicable practices of Washington D.C. and elsewhere—including Moscow—to strengthen itself for the ushering in of a new age that brings people together, not apart. In this, there’s reason to expect a great evolutionary shift when Hillary is elected—given that is the set of probabilities you choose—and strengthen the world in ways that value all beings, even those that have no value to the powerful ones who believe solely in the might of their own small egos, instead of embracing the Divinity that flows within each of you.

That, indeed, is the might we want you to experience, and will if you determine the course of action for the next few years is to promote love and harmony with all things.

The next section of our Divine Feminine Series will be about the eternal feminine and how women will be feeling their power by suggesting to themselves they do, indeed, have the strength to move the world into beautiful spaces.

Joanne Helfrich is a writer and channeler of the nonphysical energy personality essence, Rose. For more info, see About Joanne.
View all posts by JoRose →
This entry was posted in Divine Feminine, Uncategorized and tagged politics. Bookmark the permalink.

1 Response to The Divine Feminine & the Campaign in the U.S.