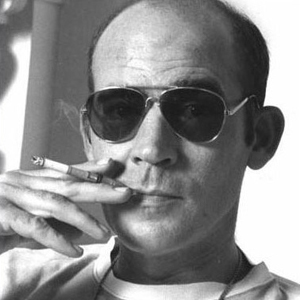 One morning at 4 am I wasn’t sleeping and, in the most random way possible, had the impulse to talk to Hunter S. Thompson. When awake, I autotyped this, starting out by asking … “would you be interested in speaking with our readers, perhaps talk about who you were when physical, what you’re up to these days, and why you want to do this?”

I’m Hunter S. Thompson, middle name Surly. I was an informative travel host who pervaded the ink lines of media through journalism and books. My main claim to fame is a movie that claimed that I was a genius. However, I deny that accusation.

I want to share what I know with somebody who will hear what I have to say now that I’m in the bardo kind of place that you may think of as heaven. However, this is more of an ontologically fraught word. Heaven is where you find it, living or dead like me.

I’m forgetting a lot these days. Forgetting what life was like while physical because I haven’t been down to earth for a while. Even while physical, my addictions kept me from behaving in any sense of the word “grounded”. I did have fears about not being accurate or truthful enough. That’s what kept me addicted.

What a world you live in now. When I was this person that I was, Hunter S. Thompson—which I have sort of shrugged off to become better and wider than when I was Hunter, having said that, I’m still Hunter, however, more of me is here now than when I was Hunter only, let’s say—I was tripping my balls off frequently so as to get to where I have found myself now.

I wouldn’t suggest this for just anybody. I wasn’t the most spectacular person when doing this shit. However, it did allow me a glimpse into the sorts of reality that frame your world, not in it necessarily.

The framework is holy. That’s what I’ve found so far. The spectacular drugs that are now coming to the consciousness of many individuals have unique benefits in that they are spectacularly grooming whole generations to come with the sorts of stimulation that’s required for the brain to be fully alive. The carpenters of these concoctions are working in their huts now to stimulate not just the economy, however great that is, but the entire planet in a sort of self-congratulatory spectator sport in which eyes will be opened, hearts will be tamed to become the sorts of gentle giants they are, and the population of countries will shift towards new worldviews. I’m certain that the effects will be thrilling.

The sense of urgency you have about change is the same I had then. I wasn’t able to fully realize the change in my lifetime, having had physical illnesses that impaired my ability to be in my body comfortably, which is why I offed myself. More about this later. However, my inner illness was real, too. I had not really gotten to the point where I was able to forgive myself for things I wasn’t able to really get past—the sorts of misery that plague everybody—nor was I whole in the sense of forgiveness for others, either. These ramified themselves in my physical body.

There wasn’t a smidgen of doubt that I was driving myself crazy with obsessive thoughts. I just didn’t have the means to address them in ways that were truly helpful. The drugs were not always the answer. They were a crater in my soul eventually, because they wouldn’t help but hinder my ability to persuade myself to be real with myself for good. So that’s not something I’m proud of, but I did learn, and I’m saying to you: don’t let the drugs do you in. They have a lot of benefits. They have a lot of nurturing qualities, too, because they will expand consciousness when done right. But I didn’t always do them right and I was not a happy camper too often because of that.

The figures of light they talk about are real here. They come and go like breezes drifting by. They console me often when I’m lounging about. I do this now a lot, forgiving myself. Mostly I can hear them like whispers in my hearing, not that I have ears now. I don’t. I hear them inside myself. This is something you will learn when you check out. You have this all inside you now, too. You only need to make sure you hold it dearly and pay attention.

So I’m sitting around here like a goat that’s lost its pack without really much to do except to talk to people like you. There are others here like me, writers who want to talk to you, too. However, they want to be asked first. I like that you asked me to do this. I have a lot of action here without there really being any action. But when it really comes down to it, I like that I can still talk to people this way without having to hear from anybody else that they don’t like it. This will be a perfect setup: if they don’t like it, you blame me and I’ll blame you.

The facts are these here now without my body. There really is an afterlife. I’m here. I don’t know how long I have been here nor will be. The supervisors here are invisible. They wreck my soul with beautiful thoughts about me. However, I’m still myself, too, lounging about, smoking, getting high, only without the miracle drugs of the sixties, seventies, and eighties.

I want you to hear me when I tell you this: there’s nothing else but you now. There’s nothing else but you now to pick up the slack of entire generations who have failed you. Have the courage and honesty to say what you think regardless of how people will take it. This was my credo when I was alive. It still works most of the time. Sometimes you really do need to be kind to people, too. That wasn’t my bailiwick either, although I did love deeply. Do that too.

Now in regard to your current administration: throw the motherfuckers out. Throw them out. Take them down. Do whatever you can to subvert the system in whole ways. Think it through. Then do what you can to build a new world without all the bullshit. Don’t build bunkers, build communities of people who help each other. Keep your farming and food sources local, and keep your health care people local. Keep the businesses small if you can. There’s nothing wrong with the businesses now, they just require oversight that you can’t give right now because you have terrible leaders in office. Run for office. Make America really great again because you and I know it can be. Don’t build arsenals like I did. Keep the faith in people. That’s something I didn’t do enough of.

Then when the time comes, die peacefully knowing you did what you could.

Do what you can to heal yourself and others. This is something I could have done to save my life if I had been privy to the kinds of resources you have available to you now. I had no real spiritual guidance from outside. Yes, I had drugs. They were awesome teachers. You have others who speak from where I am now without needing to proselytize. Try getting yourself some spiritual help if you can.

I can’t suspect anything wrong with doing this kind of channeling thing. This is heavy shit, man. The act of celebrating somebody by pulling them in to speak with you directly? How can that be possible? I can’t think of any better way to connect with what you have to gain than to teach others what they are capable of in this manner.

The only thing left to say is that I have a deep love for the planet. I have always had this for as long as I can remember. I have not done much more than to provoke people. Sometimes that’s all you need to do. Just realize that provocation is the first step. You need sane people to hold steady as you look at the options you have. The only reason to feel unsafe is because you don’t know who all these are yet. You will in time.